Be Part of Canadian History

Angus Reid is one of the more well-known research companies in Canada. Results from their surveys are often quoted on the nightly news, especially regarding the “pulse” of Canada and how Canadians feel about the economy and political parties. As a member of their online survey panel, the Angus Reid Forum, panelists can access any of these results when they sign on to the website. 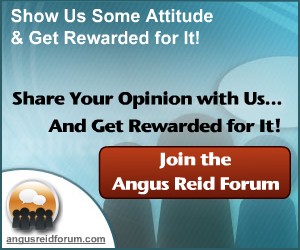 Here is an example of an Angus Reid survey asking Canadians their opinion on the Federal Budget:

The review of this survey begins with a general statement, which states “While several budget initiatives are welcomed by Canadians, the decision to raise the eligibility age for Old Age Security remains contentious.” It follows with a summary of the results – that Canadians have mixed reviews on the federal government’s latest budget although few feel the budget will affect them positively on a personal basis.

In this example, the results from panelists across the country are mostly presented as a whole, with the exception of some specific answers from Quebec, Ontario and Atlantic Canada. In some cases the results are also divided into age groups and sex.

This report shows that 41% of Canadians believe the federal budget will have a negative impact on their province, then breaks it down further to showing the percentage of Canadians who answered this way from Ontario (39%), Quebec (45%) and Atlantic Canada (37%). It goes on to say that personally, Canadians from these areas are more pessimistic than respondents in the West.

The second part of the review shows results of budget initiatives. They review three ideas that at least two-thirds of Canadians agree on, including regulations for charities, increasing the amount of goods Canadians can bring home after traveling tax and duty free as well as ceasing production of the penny.

A majority of Canadians favoured cutting government program spending (61%), and 51% would like to see the CBC’s budge cut by 10 per cent. Changes to Old Age Security were the most contentious and the results posted in their article discuss reactions based on age, sex and location in Canada.

For those interested in further details, Angus Reid supplies a link to the full report: https://www.angus-reid.com/wp-content/uploads/2012/04/2012.04.05_Budget_CAN.pdf

How Survey Results Are Used

As many panelists know, there are a variety of companies and businesses that conduct surveys to improve their products. But what results come about from political surveys and polls?

Having a company such as Angus Reid conduct the polls instead of various political parties ensures unbiased opinions and feedback. Other residents in Canada feel as if they are getting the whole story as Angus Reid is seen as a neutral party that polls Canadians from across the country. Government officials get the same benefits, and see at a glance how their policies are being received across the country.

Seeing the results broken down by age or location also helps those in power know where they can make a better impact in specific communities by implementing new programs or policies.

To be a part of this influential group of Canadians sign up with Angus Reid today! Besides seeing the results of surveys completed online, panelists also receive rewards for the time and effort they provide.