MySurvey has been been around for a long time. They have millions of members around the world and offer their survey panel to Canadians in both English and French. Here’s my experience with them.

The Survey Taking Itself

Many Different Topics
Especially if you drink alcohol regularly, MySurvey seems to have a lot of surveys available on this topic. I have completed surveys on soft drinks, cell phone providers, banking, alcohol, restaurants, cars, and electronics. There also seemed to be quite a few surveys aimed at people who have children (I don’t have any), so stay at home parents would probably especially benefit from this!

Varied Formats
The format of the surveys were also pretty different. I did a few surveys where I watched a commercial and using a live slider beneath the video to rate the parts I liked and disliked about it. Some were traditional in that they were just a series of questions. Some had images of potential product designs, etc. Even the look of the surveys with regards to colours, graphics, etc. really varied. I think this had to do with the fact that some studies said they were being hosted by “trusted research partners”, so I guess not all surveys were actually conducted by MySurvey, though you’ll still get your points.

Starting Where you Left Off
If you get halfway through a survey, and can’t complete it, you can always just exit the screen and it’ll still be listed under “Surveys Available”, under your account. I really liked this feature, especially if I was in a rush, and wanted to get a head start on a longer survey that was worth a lot of points.

Tip! You might want to try completing the longer surveys – they tend to be worth more points for every minute spent, compared to the shorter surveys offered.

Rewards Amounts Are No Surprise
As soon as you click the name of the survey, you’re brought to a screen where it’ll state the length of time it’ll take you to complete the study, as well as how many points you’ll receive for finishing it. If you get screened out of the survey, you’ll usually get an entry into the monthly sweepstakes.

The reward options available are in a sort of catalogue form, where you can sort by points value, category, or by brand to find the reward you like. Although MySurvey claims that “1,000 MySurvey Reward Points have a value equivalent to $10.00”, if you look at the rewards below, it seems to be a bit less than what they say. You also get a 10 point bonus after being a member for a month. 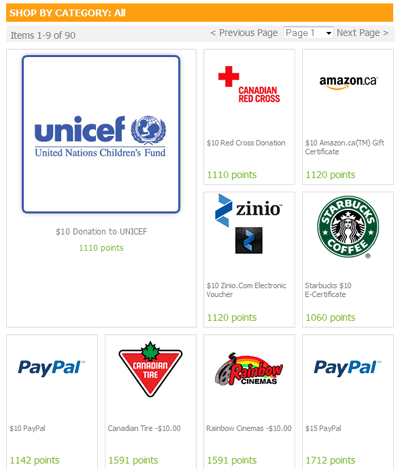 You’ll notice points are worth more when you convert them for Amazon gift cards.

They also offer an assortment of random merchandise such as a blender, toaster, kettle, earrings, small electronics, etc. Merchandise is shipped for free.

If you’re feeling very generous, you’ll get the most mileage for your points if you convert them for charity donations. For instance, a $10 donation to UNICEF or the Canadian Red Cross can be made for only 1110 points.

My Survey’s catalogue made it really easy to redeem my points. Just log into your account, click the “My Rewards” button on the top, then the big “Redeem” green button, and you’re brought to the catalogue.

Select the reward you want, and click “Redeem Now”. You’ll be shown your “shopping cart”, which will look something like this: 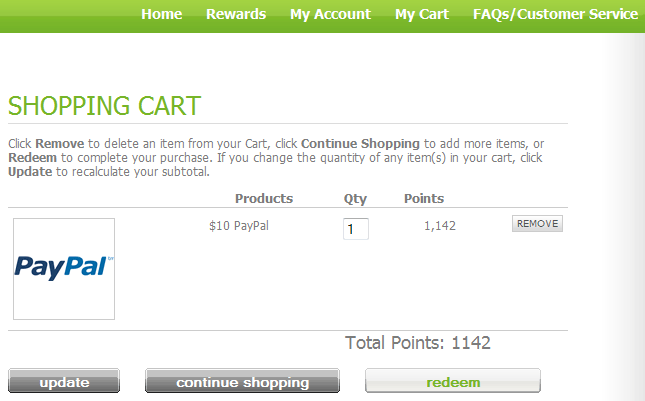 Hit the “redeem” button again, and that’s it!

Note: My Survey’s reward catalogue seems to be managed by “Perks Plus”, which is why you’ll get your PayPal payment from them, and not from MySurvey directly.

I received my PayPal reward in 2 weeks after requesting it.

MySurvey offers a pretty generous 150 points for any friends or family members (who don’t live with you) you refer to them. You can email your friends directly from your account. Just log in, click on “My Friends” at the top, and it’s easy to send an email to your friends where upon their registration with MySurvey, you’ll get 150 points credited to your account.

Every month, 10 prizes of 10,000 Reward Points (worth around $90, depending on which reward option is chosen) is awarded to 10 winners.

You can get following number of entries via the following methods:

I receive surveys pretty regularly from MySurvey, and I didn’t bother filling out any of the “LifeStyle Surveys”. These are questionnaires available in your account available for you to take any time, which are basically used to pre-qualify you for certain studies. I’m sure if I filled these out, I would receive even more surveys, but I am already getting enough as it is.

I had one issue with a survey at one point. I basically finished the whole thing, and when I hit “submit” at the end, I got a message saying I didn’t qualify for the survey. I contacted them through the web form under Help –> Contact Us, and within a few hours, I got an apology as well as my points. So overall, that was very positive.

MySurvey seemed pretty organized in terms of the surveys themselves – the topics were interesting, the format was usually engaging, and I never felt that there was a shortage of surveys to take. The reward options are really good, but I did think it took a little longer than I had expected to earn enough points to redeem for a reward. When I have requested a reward though, I got it within a couple weeks.

Overall, I’d say MySurvey is a good survey panel, but if you’re impatient, you might be better off joining Opinion Outpost, who seem to pay a bit faster. That said, with plenty of surveys seemingly always available, they’re a survey website you can really rely on.

If you’re not a member, click this link to join MySurvey for free.